Pros and Cons of Living in Baltimore MD 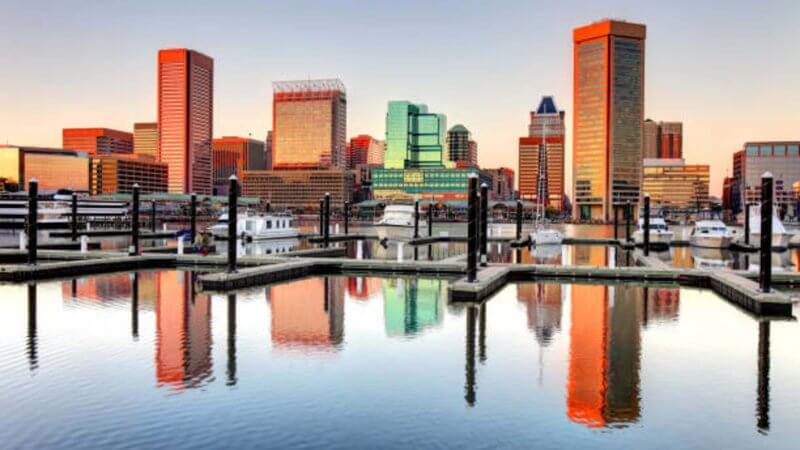 Baltimore, Maryland has a reputation for being dangerous. Some of the most violent neighborhoods in the country are located here. And with higher than average living costs and traffic there’s no denying that Baltimore is not always an easy city to live in. But Charm City also offers some of the best things to do outside of your doorstep, from world-class museums and restaurants to outdoor adventures like kayaking on the Patapsco River or hiking through Gunpowder Falls State Park.

Read our pros and cons guide to determine whether Baltimore is the right place for you.

Pros of Living in Baltimore

1. Baltimore is brimming with history.

Founded in 1729, Baltimore is one of the country’s oldest cities. Historically an important seaport, it has a rich history with ties to the War of 1812 and the American Revolution. If you love visiting historical landmarks then this city is perfect for you! Fort McHenry is the city’s most famous landmark, and one of its major tourist attractions. Here you can see where Francis Scott Key famously penned “The Star-Spangled Banner” before the Battle of Baltimore. Baltimore is also home to a number of other historical sites, such as Hampstead Hill and the War Memorial Plaza with its Vietnam Veterans’ Memorial Wall. The USS Constellation is another popular site to visit for those interested in naval history.

If you love to stay on the edge of your seat, both figuratively and literally, this is the city for you. Baltimore excels in all sorts of sports. The city has several professional teams, including the MLB’s Baltimore Orioles, the NFL’s Ravens, and Major League Soccer’s D.C. United. The University of Maryland offers a variety of sports teams as well so college sports fans have plenty to cheer about too.

3. There are many diverse neighborhoods in Baltimore, each with its own character.

Baltimore has been dubbed “The City of Neighborhoods” because of the many distinct communities that call the city home. If you’re thinking of moving to Baltimore, there’s a neighborhood for your personality type.

4. The Inner Harbor is a tourist attraction and an economic driver for the city.

Baltimore’s Inner Harbor is a hub of activity with attractions for all ages. If you’re interested in history, hop aboard the USS Constellation or go on a harbor cruise and learn about Baltimore’s maritime past. The Maryland Science Center has plenty to offer kids of all ages – from hands-on exhibits like the famous butterfly garden to high-tech inventions that defy gravity – while adults will enjoy being amongst some of the world’s most spectacular sailboats at the Sailing Capital of America, Friendship Cove Marina. 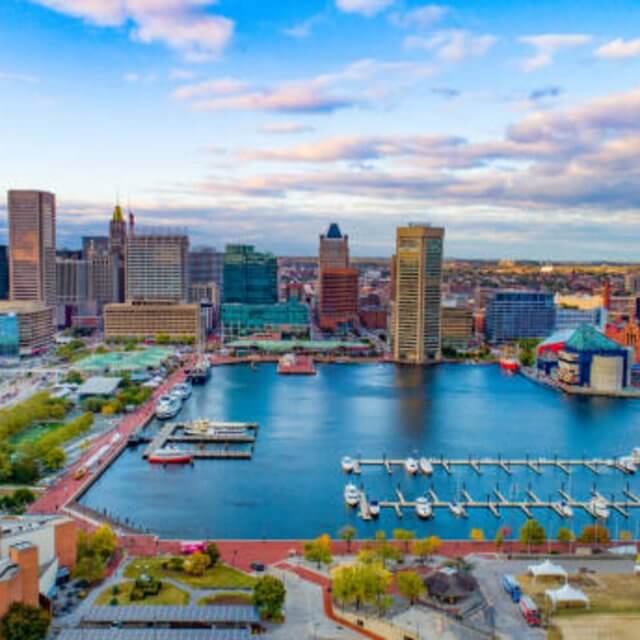 The Inner Harbor attracts tourists an helps the economy of Baltimore.

Johns Hopkins University (JHU) is one of the top 20 colleges and universities in America according to U.S. News & World Report’s 2013 rankings, which puts it on par with prestigious Ivy League schools such as Princeton and Yale Universities. JHU offers a range of undergraduate programs for students interested in pursuing careers from medicine or law to engineering or computer science; additionally, there are more than 30 graduate-level degree programs available at this internationally renowned institution that has consistently ranked among Newsweek’s “Top 100 Places To Go In The World.”

Johns Hopkins University is located within a stone’s throw of Baltimore City; this location not only provides students easy access to an urban environment without having to live there full-time but also gives them opportunities that would not be available were they studying in another city or state. Additionally, Johns Hopkins University offers more than 100 undergraduate courses through its partnership with Goucher College and Loyola University Maryland – both schools are just minutes away from campus!

Johns Hopkins Hospital, the teaching hospital for JHU’s Medical School, has been ranked number one in America by U.S. News & World Report every year since 1990 according to its 2013 rankings, which puts it on par with prestigious hospitals such as Massachusetts General Hospital and Mayo Clinic. This hospital is one of the leading providers of top-quality patient care, medical education, and scientific research in the world.

Baltimore’s green spaces offer many activities for residents and visitors alike. Living here means never having to worry about getting bored on a sunny summer afternoon because there are plenty of parks where you can kick back with friends or take your dog for an enjoyable walk. The expansive 745-acre Druid Hill Park features several attractions including a golf course, a children’s zoo, and a network of more than 25 miles of hiking and biking trails.

Outside of the city, Baltimore residents have easy access to the Appalachian Trail, the Patapsco Valley State Park, and other nearby national parks like the Assateague Island National Seashore and the Harpers Ferry National Historical Park.

In the winter, many Baltimore residents and visitors enjoy going ice skating at one of several city-owned indoor rinks or taking advantage of a number of nearby ski resorts like Wisp Resort in McHenry, Maryland for some downhill skiing. 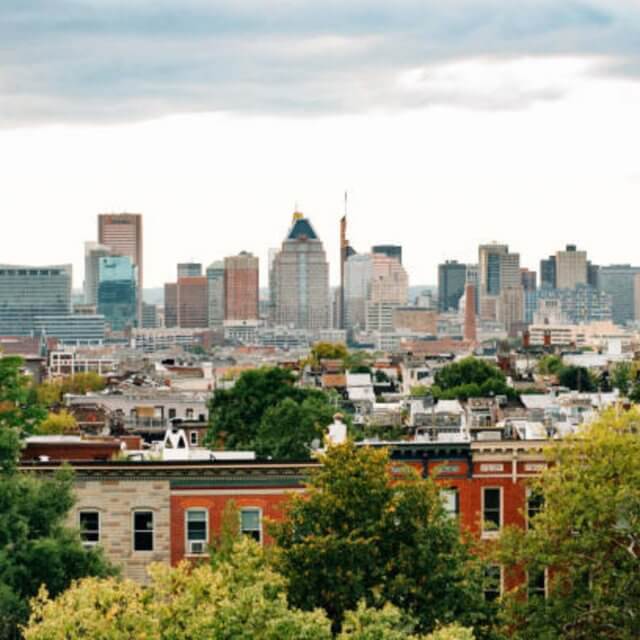 You wouldn’t wanna miss the parks and green spaces of Baltimore.

Cons of Living in Baltimore

With loads of history, beautiful green spaces, and more, there’s a lot to love about living in Charm City, but it does have its drawbacks.

1. The cost of living is high

Baltimore isn’t as affordable for those looking to buy homes or rent apartments in the city center like Fells Point where housing prices are much more expensive compared with areas outside of downtown such as Towson Town Center or Edmondson Village.

What neighborhoods should I consider living in? In general, Northeast and Southeast Baltimore offer lower-priced options for renters while Southwest offers a variety of different price points depending on how close you want to be to Downtown attractions.

2. Traffic can be a nightmare during rush hour

Baltimore is notorious for its traffic with the average commute time being around 32 minutes. This often means that you’ll get stuck in horrendous traffic during peak hours from morning to late afternoon which can be a nightmare if you’re trying to make it through Baltimore’s notorious “Ridge” on Route 40 or Interstate 95. To avoid getting stuck behind the wheel, consider traveling during off-peak hours or using the city’s public transportation network.

3. Crime rates are higher than the national average

Crime rates are higher than the national average and are still increasing. In 2020, there were over 210 homicides in Baltimore. While crime is more prevalent here than elsewhere (especially for violent crimes), it doesn’t mean that you’ll be living your life on the edge or unsafe–you just need to know how to take precautions against being targeted by violence if you live or work downtown.

The most dangerous area in the city is East Westwood, which has 480 violent crimes per 100k citizens–more than double that of any other neighborhood in all of Maryland! You may want to steer clear if you’re looking for peace and happiness on your block.

The safest neighborhoods include Roland Park, Brooklandville, and Edgemere.

4. Baltimore has one the highest rates of unemployment in the country

Baltimore’s economy is built on two major industries: life sciences and steel production. The city was once a manufacturing powerhouse but has faced challenges as jobs became more scarce over the years. The metro region has been affected by globalization – namely outsourcing of American jobs offshore – that have increased poverty levels for many families who can’t afford basic needs like food and shelter while simultaneously weakening public services.

In addition, high levels of crime make people less likely to do business which also contributes to unemployment rates being so much higher here.

5. The public schools are not up to par with other cities

If you have children, you might want to consider the public schools before moving. The Baltimore City Public School system is one of the lowest-performing in America, and that may be a concern for those who have children or are planning on having them. Many parents with the means choose to enroll their children in private schools. Parents who don’t want to pay for an expensive education might consider other options like charter schools which offer better opportunities at lower prices.

Baltimore experiences a very humid climate due to its proximity to the coast. Summers are typically quite hot and humid, with an average of 19 days above 90 degrees. Winters can be cold and snowy, averaging around 30 inches of snow a year. 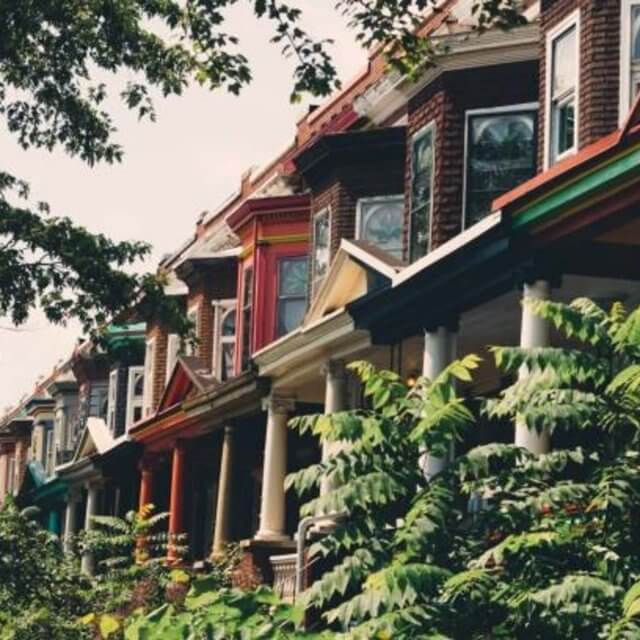 Think about it, don’t be hasty!

Is moving to Baltimore right for you?

People who are considering a move to Baltimore should take into account the pros and cons of living here. If you decide Charm City is the right place for you, Cheap Movers Baltimore is here to make your move easier! We help you find licensed and insured long-distance movers in Baltimore for a great price. Request your free moving quotes today.